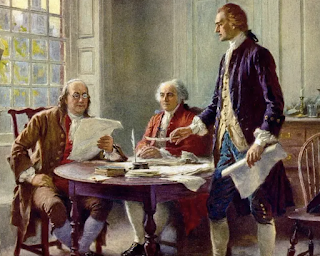 “Hmm, Pluto hasn’t been discovered yet but when it is, someone is going to realize the 2020s in America is going to be a bitch and a half.  Okay let’s sign this muther.”

I have been discussing the USA Pluto return for a couple of years.   As we know there are three dates in 2022 where Pluto will be exactly where it was on July 4, 1776, at the signing of the Declaration of Independence.   Feb 22, July 11, and December 28.   As I mentioned last month, because Pluto’s orbit is a bit wonky there is some debate in astrological circles about the dates being in 2022 or instead 2024.  But in truth no one is getting that worked up because, well, because it is Pluto.   Pluto has a long punch.  The bottom line is that Pluto will be grinding it out in the USA for the next couple years no matter what date is exact, and it already started years ago when Pluto moved into Cap in 2008.

I would like to point out that as we approach the first date of 2/22/22 something happened last week that seemed perfectly Pluto return.  Pluto rules plumbing.  Pluto speaks to fresh water coming in and the pipes that remove waste.   Last week there were reports that the former president flushed documents down the toilet.    Sometimes astrology is just so on the nose.

Given the USA influence in the world (either pluses or minuses) it does not really matter if you are or not an American, we are all in this profound experience together.     Let’s all take a breath and watch this space and as always proceed with love.